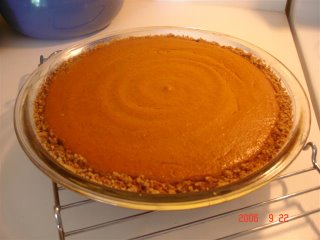 As soon as Matheus saw the mounds of fall pumpkins in front of the market last week, he started to beg me to buy one for him (and he wanted the huge one!) in order to make pumpkin pie.
We were definitely going to buy some pumpkins, but I wanted to wait a little more, you know, it is not even October yet… Plus I wanted to get the pumpkins at the farmers market, as there are a variety of them and they look very nice there too.
Trying to explain all that to a 4-year old didn’t actually worked well, and Matheus started to ask me every day when we were going to buy our pumpkin to make some pie. So, in order to keep my sanity, I finally gave in and we both headed to the kitchen to make the so desired dessert.
Now, I have got to say: it was so worth it! Pumpkin pie is soooo easy to make, and so delicious, that there was no reason to wait until we “feel like fall”. Matheus was definitely right, it was time for pumpkin pie, and we really enjoyed ours over the weekend!
I opted to make a cookie crust instead of the more traditional pie dough, but it is just a matter of personal preference. I am not a big fan of piecrust (except for apple pies!), but do enjoy the traditional cookie-crumb crust used for pies and cheesecakes alike, so I decided to use that instead. For this crust I used a cookie called Vanilla Snaps, which I recently discovered and liked a lot, but the regular graham cracker will work perfectly here. And, for those who like ginger, I bet ginger snaps would work really well here too.
I didn’t follow an exact recipe, but sort of made mine based on other recipes I have previously seen, and since it was a basic traditional pie filling, it worked very well. The filling was very creamy, and nicely complemented by my yummy cookie crust!
As I said, this was so easy to make that Matheus went ahead and mixed up the filing all by himself; my only help was opening the can of evaporated milk to him.
I don’t even need to mention that he was very proud of his pie, and was more than happy when eating his share. It was definitely time for Pumpkins around here!!
Ana

Note: If, like me, you also don’t care for the crust and feel like the filling is the best part, then check out my pumpkin custard recipe, it is really good!

Preheat oven to 325 F.
Mix cookie crumbs and melted butter together in a bowl. Press mixture into bottom and sides of a pie plate and bake for 5 minutes. Let cool.
In another bowl combine the rest of the ingredients until smooth. Pour into pre-baked piecrust and bake at 325 for 50 minutes to 1 hour, or until center of pie is almost set. Let cool and serve!

Mmmmm pumpkin pie! I like the nice swirl on the top of yours and your use of a cookie crust.

Brilynn, thanks! I enjoyed the cookie crust a lot!