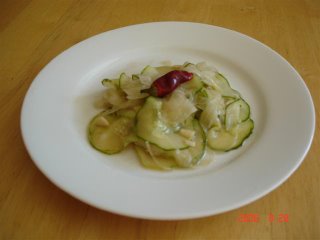 I know, the picture does not look that good, but I like this recipe so much that I had to share it here.
We are not big fans of pickles at our home; I never buy pickles, as we are not used to eat it with anything. However, I have been making this particular recipe every summer since it appeared on the magazine, in 2003.
Sweet Spicy Cucumbers are a type of refrigerator pickle, those that you don’t have to can and that keep for just a small amount of time in the fridge (or am I wrong?), but they are so good that they don’t even last that long.
The mixture of sugar and cider vinegar give these cucumbers the sweet-spicy taste, making them so delicious that they became almost addictive. The mustard seeds and garlic adds bite, and the pickled onions are great, actually my favorite part! I don’t find the chiles actually add heat; they are here more for an extra subtle burst of flavor.
These are good when paired with tomatoes, or just as a small side dish to a summer meal. The recipe says to marinate for 4 days… well, I find they super tasty on the next day already (or like this time that I made it in the morning and had some in the evening, yum!). Also, for those controlling their sugar intake, I made it this time using splenda (2 tablespoons), and it turned out to be just as good, I couldn’t even tell it wasn’t made with real sugar after it was done.
Really good stuff, I am the one who likes it the most here, but the husband tries a little bit every year with me! Ana

Note: I know, splenda may not be the healthiest of things, but at least it has no calories… and sugar does have an effect on me, sort of makes me cranky later in the day, does anyone else feels this when they have too much sugar?

Arrange half of cucumber in a 9-inch pie plate. Top with half of onion. Repeat procedure with remaining cucumber and onion.
Combine vinegar and next 5 ingredients (vinegar through chiles) in a small saucepan. Bring to a boil; cook 1 minute or until sugar dissolves, stirring occasionally. Pour hot vinegar mixture over cucumber mixture. Cover and marinate in refrigerator 1 to 4 days.

yum! I completely forgive you for the splenda ;).. especially since low-sugar is not the way to go. I completely hear you about the "sugar crashes". Ugh...!

Ana, these sound/look lovely. Never made pickles at home. I don't often eat them as the ones ready made are revolting in my eyes.


Veuveclicquot, first of all, thanks for visiting and comenting! Thanks for the support, I really liked the result with splenda, very good, I believe I will only be making it this way from now on!

Valentina, see, I had never made pickles before this recipe. This one is easy and I think very tasty too, they are really adicting! And yes, I am also not fan of the store bought pickles myself.