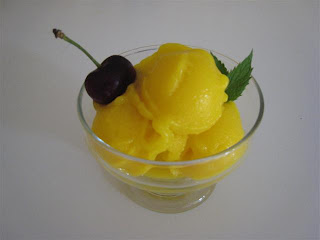 It is hot, around 100 degrees F most days, what do we do?? Eat ice cream, of course!!!
This week it's been nothing but water (lots of it!) fruit juices, popsicles and sorbet, more specifically my absolutely favorite: Mango Sorbet!!
Yum, yum, and yum! I don't have better words to describe this sorbet, yes, it is that good! Mango is a delightful fruit all by itself, it is sweet, it is creamy, aromatic. Perfect and delicious alone, freeze it and you get the creamiest and most deliciously natural fruit concoction!
I made my sorbet by simply pureeing lots of pieces mango in a blender until it got really creamy and no chunks remained. Then I added a squirt of lemon juice and a touch of simple syrup (recipe bellow), but just a little bit to make its natural sweetness shine even more after being frozen (as I find that the very cold temperature do tame a little of the sweetness of most of ice cream bases I make).
Depending on the fruit you use you may need to use more or less simple syrup, and I know that some mangoes in Brazil probably would not need any sweeteners at all.
I use the simple syrup here for the mere fact that is more stable to be frozen and even more than that because the sugar is already completely dissolved so I get the base sweetened without having sugar granules in my base.
After all blended and nicely smooth, I strain the fruit puree and just pour it into my ice cream machine. After 25 minutes it is ready and can be dished out as a soft serve, but I do prefer to put my ice cream in the freezer for a couple of hours to let it "ripen" there before consuming - the texture does improve with some time in the ice box!
Make it in the morning and by the afternoon you will be in heaven, again... YUM!!!!
Ana

Simple Syrup
Combine 1 cup of sugar and 1 cup of water in a small saucepan. Bring it to a boil, reduce heat and let simmer for about 5 minutes, or until all the sugar is completely dissolved and the mixture gets "syrupy"!

You can use it to make any flavor of sorbet, just puree the fruit you like and add simple syrup to taste. It can also be used (and works beautifully) to sweeten ice teas and lemonades, or any juice in general, as I mentioned before, the sugar is already dissolved, so you get your beverage sweetened right away, without worrying about sugar bits in the bottom of your jar/glass that may make the last portions of juice too sweet. 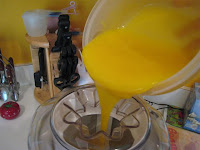 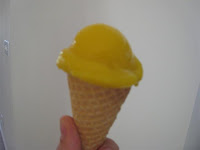 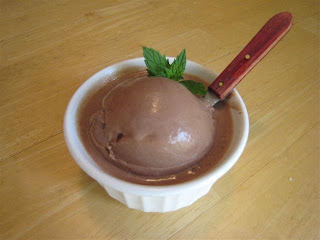 Yes, another ice cream recipe, and there are actualy more to come...
And I promise this ones actually look and tastes a lot better than it appears in the picture (it melted a little too fast when we were eating it, but just because I wasn't patient enough to wait for it to firm up in the freezer before tasting it.... oops! Hard thing to do waiting for ice cream to harden...!)

Isn't summer the best season ever? The most delicious fresh fruits, produce that you can harvest at your own backyard, lots of farmers market opened around the country, what could be better than that? Well, besides all the fruit and veggie goodness, it is also Ice Cream season, Yay!!!
This is the time of the year when I get creative with both my fruits and creamy concoctions, and when my ice cream machine gets little to no rest.
This year I have actually entered into a sorbet mode and have been trying some recipes with many fruit variations. Most came out great, and both recipes and pictures will be posted here, soon.
But right now I wanted to follow up with a recipe that I adapted from the Peanut Butter Ice Cream I posted the other day. I tried making it with Nutella instead of PB and the result was a wonderful, delicious and creamy Nutella Ice Cream.
Who doesn't like Nutella?? Well, I don't.... I LOVE Nutella!!
It is one of the best creations ever, creamy chocolate and hazelnuts... makes my mouth water just to think of it! It is good with strawberries, warmed up over crepes and ice cream, and mixed with hot milk it makes an awesome hot chocolate, but better than all that is having Nutella in its simplest form, straight from the jar by big spoonfuls!
So, I got the so good Nutella and transformed it into ice cream... oh yum, it did turn out quite good!!
I am still trying to figure out the sugar ratio, as I thought it came out a little sweet both times I made it, but my sugar tolerance is usually lower than most people I know, and most of my family who tried really liked it as is.
Of course I used less condensed milk than the PB recipe, as Nutella is already sweetened, but it still was a little too sweet for me, plus, the first time I made I used a little more sweetened condensed milk than I should and its flavor sort of overpowered the Nutella itself. So I am considering either decreasing that, or increasing the Nutella amount next time, or maybe both.
Another thing I am considering is adding a bit of hazelnut liqueur next time I make it, as I would like to reinforce it in the end product. (Got stop by the liquor store! Ic, Ic!!)
All in all, it was still good when I made and both times there was not a bit left for seconds. So I am guessing it is safe to post it right now and I will come back with any updates as soon as I make it again!
Enjoy summer, and lots of ice cream!! Yummmmmm!!!
Ana

Beat the sugar and eggs in a bowl until very well mixed. Set aside.
Bring milk to a simmer in a saucepan over low heat, remove from stove and carefully add the milk to the eggs and sugar, beating constantly. Pour the mixture back into the pan and cook over low heat, stirring constantly with a wooden spoon until it thickens slightly. It doesn't take too long, and remember: don't let the mixture boil or eggs will scramble.
Remove from heat and strain the mixture into a bowl. Mix in the Nutela, condensed milk and the cream (taste and see if you would like more condensed milk at this point - I don't like things too sweet, so you might adjust the sweetness to your tastes).
Cover and let the custard base cool in the fridge overnight. Pour mixture into ice cream maker and churn accordingly to your machine's instruction.
Let ice cream harden in the freezer for a couple of hours before serving.
Posted by Ana at 1:07 PM 16 comments: