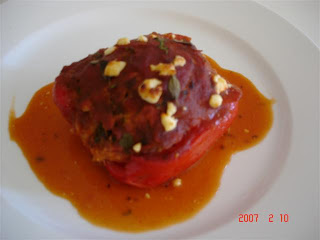 It sounds funny, but I believe that almost everyone who cooks on a frequent basis has a recipe for stuffed peppers. I am one of those and I have got to say that I literally threw my old recipe away after making this version last week.
I liked it a LOT and was not the only one to give it five stars at our home. Matheus loved it and made sure I saved the leftovers for him, and my husband could not stop saying that this was definitely a good recipe that I should save and make again.
Yay, lunch that day was definitely a success!!
And the recipe is simple to make, not much fuss and you have yourself a very nutritious and delicious meal in no time! (not counting the baking time, of course...!)
I loved the idea of using bulgur in the filling, it gave the meat a great taste and texture as well. And the addition of spinach and zucchini added a bonus of veggies and vitamins to the dish.
I sort of followed the recipe and made my own alterations, but and am posting the original one here for you all.
The things I did different was to use ground Turkey instead of beef, and I adapted the quantities for the three of us, making 4 stuffed pepper halves (1 was saved for Matheus to have the next day!!). Also, I used my favorite pasta sauce for the tomatoes part (just poured the sauce over the peppers had been stuffed), and added about 1/4 cup of tomato sauce to the meat mixture as I didn't want the filling to be too dry (although the zucchini does add some moisture to it too!).
I also blanched my peppers for a couple of minutes, just to make sure they would be on the softer side after baked, and they came out just perfect for us, husband even mentioned that (yes, he really liked the recipe too!). And since I had boiled some water, I dropped a little ball of meat mixture in it to cook, just so that I could taste the seasonings and see if it had enough salt and spices in it. Easy to taste and help you adjust the seasonings to your like.
We had ours with brown rice since it was cold outside and we wanted a nice homemade meal to warm us up, but I am pretty sure a green salad on the side would also be great with this.
This was definitelly the best stuffed pepper I have had (Husband said that too!), and it will be repeated here for sure. And if you end up trying, I hope you like it as much as we did!
Enjoy!
Ana

Preheat oven to 350 F.
In a large bowl combine the beef, spinach, zucchini, onion, bulghur, egg, oregano, salt and a few grinds of pepper. Mix until thoroughly combined.
Arrange the pepper halves cut side up in a 9 by 13-inch baking dish and fill each pepper half with the meat mixture. Pour the tomatoes over the peppers and sprinkle with the feta cheese. Cover with foil and bake for 30 minutes. Uncover and bake until the meat mixture is completely cooked and the peppers are tender, about 25 minutes longer.
Yield: 6 servings.

What a coincidence, Ana!! I was preparing Quinoa tonight ( quinoa has been my latest passion) and on the box that was a recipe for Stuffed Peppers with Quinoa!! Of course I saved and commented qith KC, who was making the beans.

Brisa, I also have a recipe for stuffed peppers with quinoa, it is on the top of my to try list and I want to make it soon! I loooove quinoa!

I'm glad to see you used red bell peppers instead of green. I find the red have a much better flavor.

Terry, the red peppers are sure better than the greens, or at least I prefer them!
Thanks for visiting!
Ana