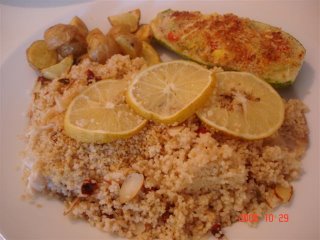 I have been posting so many sweets and baked goods that it doesn’t even look like I cook anymore. It is definitely not it, since I do cook our meals everyday, but I have mostly been making easy and simple things, and haven’t had many new recipes or pretty pictures to post here.
Last weekend though I tried a savory recipe that was worth mentioning here. I will begin saying that I really liked the method of preparation here, since it was easy, simple, and quite practical, as you basically have only one dish to clean. But I have to say that the flavors can definitely be improved.
We liked the combo of tilapia and couscous, plus the cooking method kept the fish really moist, which we all enjoyed a lot.
You basically lay the fish fillets on a baking dish and scatter the seasoned couscous on top of them, add a bit of water to the dish, cover up with foil, bake for 20 minutes, and voila! A nice and easy meal for those busy days that we all have, quite often I might say.
As I said, the fish was very moist, and the couscous perfectly cooked, nice and fluffy! However, the fish here absorbs some of the flavors that are sitting on top of it, so I think that the couscous could have been better seasoned. Cumin and lemon do go together well, as do fish and lemon too, but I still don’t think it was the best combination for my palate on that day. In a certain way it did complemented each other, and the dish was tasty too, but I guess I would like something different for the couscous. I was thinking about something like a “parmesan-type” flavoring, but am not sure it would go well with the fish.
Actually the flavors I have in mind seems to go better with chicken than with fish, so I am considering trying this method with chicken breasts… it might work, don’t you think?
Also, I think that the flavors would have benefited by the use of vegetable broth (or fish broth, it does exist, doesn’t it?) instead of water in the bottom of the dish. It would have added some seasoning to both the fish and the couscous.
See, I did like the method and the idea of this dish, and will certainly try it with the variations I have in mind. Meanwhile I will leave here the recipe for those who would like to try, as it was a very easy to make dish!
Oh, I just wanted to say that I found the quantity of the couscous to be a lot more than necessary for 4 people. I adapted the recipe for 3 fish fillets and used about 6 ounces of couscous, which did increased in volume quite a bit and basically took up a lot of space in the dish. You can barely see the fish in the picture, as it was literally covered up with the couscous. We had quite a bit of it leftover (and wasted, as it had the fish smell/taste to it, both which I don’t care much when reheated…) so you may feel free to adjust the amounts to suit your tastes and appetite!
Another thing is, I forgot to add the parsley to my finished dish, and only realized that after we were already eating the fish… so, my picture looks a lot paler than the one in the magazine, which was so bright and vibrant-looking. I was a little disappointed with that, but the dish tasted good, so I decided to let it go. But in case you want to see the major inspiration for me trying this dish, there is a nice picture here, and the original recipe, as I did change a few things on mine... mostly reducing the fat)
I served ours with stuffed squash and some baby roasted potatoes (the potatoes were not necessary here, but I had it in the pantry for a while and needed to use them up….), all of which I baked while preheating the oven/baking the fish, definitely a happy meal to us all!
Enjoy!
Ana

Preheat the oven to 375°. In a large bowl, combine the couscous, almonds, sun-dried tomatoes and cumin and season to taste with salt and pepper. Stir in the olive oil and the lemon juice.
Arrange the tilapia fillets in a single layer in a 9-by-13-inch baking dish, season with salt and pepper. Cover the fish with the couscous mixture and arrange the lemon slices on top. Pour 2 ½ cups water around the fish, cover with foil and bake until tender, about 25 minutes. Top with the parsley.

Ana, this is a really interesting recipe.I really like it.I'm a very big fan of couscous and I always struggle not to eat loads.

I love fish and love seeing such beautiful dishes with it.

About the parmesan, Valentina prepared a wonderful recipe with fish fillets and parmesan, I don't know if you remember it. My boss (who doesn't cook at all) saw it and printed it. She took it home and told me afterwards that it was a hit. Everyone loved it.

Your fish looks great and lemon is always a plus. :D

Valentina, this is a good recipe, I really liked it and plan on improving and testing different flavors and combinations here!

Patricia, I will check the recipe you mentioned, I love everithing with parmesan flavor to it! We are little mice here at home, everybody loves cheese!

I made tilapia last night...it's my favorite!