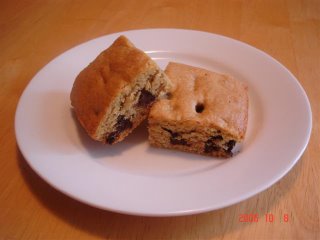 Matheus has a thing with the peanut butter grinder of our local natural store. He think is the coolest think to turn it on and see zillions roasted peanuts inside become peanut butter! Does he like peanut butter? Well, not really… but the always begs for me to buy some for him when we go to this particular store, just because of the machine. Most of the time I won’t buy it, but there are some days I end up giving in.
He is always hearing about peanut butter and pb&J sandwiches from his friends; he has tried it several times, but definitely doesn’t care for it at all. Neither my husband nor me grew up eating the stuff ourselves, so we are not crazy for it either (although we all like to eat salted peanuts!). I don’t even buy peanut butter, unless I am making one of my husband’s favorite ice creams, which by the way I should post here, in another post, of course.
The other day Matheus went to the grocery store with me and he had to have his little peanut butter/grinding machine fix, so I bought the smallest amount for him, and we all came home happy.
However, after one week, the thing was still sitting there, at the corner of the refrigerator shelf, completely isolated and ignored. So I decided to use it up in come sort of recipe, and hope that at least someone would eat my baked good.
I then found a recipe for Peanut Butter Chocolate Chip Brownies, and decided to give it a go, as Matheus declared that he would eat a cake with the peanut butter in it, and oh yes: “I love chocolate chips mommy”!
He indeed ate the brownies, and said he liked it, but nothing major as some other cakes and stuff I make that he really likes (one piece and then it was the brownie’s turn to be forgotten and left in the corner by itself…)
I have to say that this is not my favorite recipe. First of all, because to me brownies should be chocolate! It was actually interesting trying this recipe, as the texture of the finished cake (yes, to me this should be called cake, but anyways…) was exactly like that of a chocolate brownie: was moist and sort of fudgy in the middle. The peanut flavor however was very subtle, so I believe that the amount of PB could be increased here, or maybe adding some crushed peanuts to the batter might help too.
It is super easy and quick to make, so I will post the recipe and the improvement options for you all, in case someone would like to try it! ‘Cause for me… if I want brownies, I will make brownies, and by that I mean chocolate brownies, of course!
Oh, and before I go, I just wanted to say that the chocolate chips were a good complement here, and just as Matheus, I liked them too!
Ana

Preheat oven to 350°.
Coat bottom of an 8-inch square baking pan with cooking spray (do not coat sides of pan).
Lightly spoon flour into a dry measuring cup; level with a knife. Combine flour, chocolate chips, soda, and salt in a bowl.
Combine sugars and remaining ingredients in a bowl; stir until well-blended. Add flour mixture, stirring just until blended. Spread batter in bottom of prepared pan. Bake at 350° for 25 minutes or until a wooden pick inserted in center comes out almost clean. Cool on a wire rack.

Ana, despite all your comments, I am really interested in this recipe!

I agree with you about the chocolate thing, but just so you know how much people like to reinvent recipes, there is a store here in Sao Paulo where you can find 16 different brownie flavors... :D

Patricia, this is a great recipe, easy and quick to make, plus it was very tasty too! I am pretty sure you will enjoy if you decide to try it!
By any means I wanted to get people not to try this (if I really don't like a recipe, I won't even post it here! hehe!), I just put there my coments that I would probably prefer a chocolate brownie instead, but for the peanut lovers, this is a great one!

Cinara said...
This comment has been removed by a blog administrator.
12:01 PM

Hi Ana. :) Sorry you didn't care much for the PB brownies.

I just tried some PB brownies recently too and they were very good - but full-fat all the way.

I didn't really think of them as brownies though - more of a blondie really. Maybe that would help. :)

Ana, I am not a big fan of PB myself. Like it on toast sometimes - brown bread toast. Over here it is not a big seller either. When I do buy it I go for a small pot from the local health food shop.Amendocrem. I dont'think that I remember that. The name rings a bell but the taste..not at all.