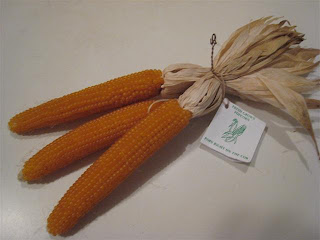 Anyone who cooks on a regular basis know how many times we end up trying a recipe or a (sometimes not so) brilliant idea and the results are way less than what we expected it would be.
Well, this week I had one of those disappointments, and even though it wasn't anything major (no one was hurt and there was no big waste of food either!) I was kinda of curious to know why it didn't work.
Soooo, here I come to post it and ask you guys to help me figure out what I did wrong. And to start with, here is what I was trying to do: make popcorn right from a fresh popcorn cob!
I got this fun and cool popcorn thing from my boss. She went to visit family members in Massachusetts and came back with some of these for each of the ladies that work at the chocolate shop where I work (She also brought some delicious apples which are already gone... some we ate and some turned into apple muffins, yumm!! But this is another post...)
She mentioned we could either use it as decoration or try popping it. Obviously I thought this was the most fun thing ever (I like having fun with food!) and of course I tried to pop it!!
If you like food like I do you would probably understand my excitment and try to pop it too, right?! (I thought so!!)
However, the thing didn't go as I expected. The popcorn did come with instructions on how to pop and it was as simple as could be: "Place cob inside small, brown sandwich bag. Fold bag... and place in the microwave... Cook on high power for about 2-3 minutes. When popping slows down... it is ready."
Sounds easy, doesn't it?? And that's what I though!
So I took one of the popcorn cob... 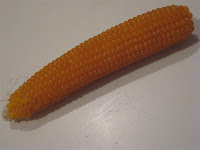 ... placed inside a brown paper bag, being careful to not fold too tight and in the microwave it goes, we hear it popping and do the popcorn dance around the kitchen (!!)... 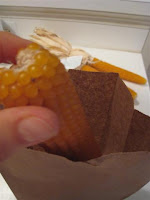 ... popping sound slows down, we turn off the microwave and remove the bag...
... the smells of popcorn invade the kitchen as we open the bag ("hummm, fresh popcorn!"), and then... Look what happened!!!
The popcorn surely popped, but it didn't come out of the cob! 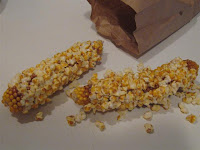 Well, I think, I might have done something wrong, lets try with another one.... same thing again, carefully popping the precious cob and.... nope! Didn't work again, thus why you see 2 popped corn attempts on the picture above.
So, my questions are: Has anyone tried this before? Is this supposed to happen?
We were sort of disappointed (not much though, as it was simple to get my pan and some popcorn kernels and pop my own popcorn at the stove as I always do), but at the same time we could not figure out what went wrong.... was the popcorn too young? too old? too tight in the cob? (does that even make any sense?)
The 3 of us (me, Matheus and hubby) stayed there, trying to pick the popped corn from the cob but it was no help, it was tough and not really very edible.
After a day of thinking and not coming up with anything, Matheus had this idea which got us both thinking: "Mommy, why don't you take the kernels out of the cob we have left and pop them in a pan on the stove, like the ones you make for us all the time?"
Man, I didn't even think about doing that, but it does make sense, doesn't it? So, would scraping the kernels off the cob I didn't use (I had 3 cobs) result in the same kind of kernels I buy for popping popcorn? I sound so silly, but this popcorn thing did get me puzzled!
If I don't get another idea I will definitely try that and post a feedback here to say what happened!
See, I always post the good and yummy recipes we try, but even though this was not a recipe (more like a fun culinary experiment!) it was a failure and I wanted to share. Not just to see if someone might have some insights about my popcorn disaster, but also to show that not everything goes right in the kitchen.
There are always "those days" when nothing seems to cooperate and everything sort of goes to the wrong direction of what initially was planned, but even with all the kitchen mishaps and a few errors here and there I still love cooking and experimenting in my kitchen. To me this is still the most fun place to be!
Let's see if someone can help with this one, I will be here, waiting for your comments and responses! And, even if you don't know the answer, please comment and add your ideas, it is always fun to read what my blog friends have to say!
Ana
Posted by Ana at 12:44 PM

Amiga, what a funny post!! :)) Thank you, I needed. Not for your popcorn being ruined, that's a bummer, but the way you've described the whole thing..hehe..SORRY!!:(( I totally understanding the expectation and frustration. I' d be frustrated too!! Promises but not deliveries (like "the book?? nooooo, there's a diff matter). Ba-ha!

Anyway, my THEORY behind the (pop)corn is that the heat was not enough to get it it to pop(read detach from the spear)!! Haha, I had to laugh that Matheus was so right on getting the corn out..hehe..Smart guy!

Hmmmm... I have no idea why it didn't work out but I think it's a great idea that you tried to make popcorn fresh from the cob. ;-)

I just found your blog when I googled popcorn on the cob. I bought some today at our local farm market and I just popped it. With their display they had instructions and samples. It worked great... they told me to rub butter over the corn, they also gave me a big brown lunch type bag to pop it in. I hope this helps:)

My name is Ashley and I am an American living in Brazil near Sao Paulo. I left a comment on your pannetone post but then realized it was posted in 2006! : ) I just wanted to thank you for your great recipe. My girls and I plan to make the pannetone for Christmas. It is very popular here and I would like to learn how to make it. Anyways it has been so nice to 'stumble' upon your blog and I will be returning often to get some great cooking ideas : )

Hi Ashley!
How nice that you are living in Brazil! I hope you are enjoying it there as much as I do!
If you would like to please send me an e-mail so we can talk more and I can even point you towards other recipes of Pannetone and Chocotone in case you would like to try that too!
I tried visiting your blog but wasn't able to, but I would love to talk to you via e-mail if you would like to!
Thanks for visiting my blog!
Ana

Ashley Dumas said...
This comment has been removed by a blog administrator.
9:16 AM

Ana darling, i cannot help with this one. what about the comment left by Robyn? Let me knwo how you get on. by the way darling, can you send me one of your lovely chocotone recipes? I wnat to use some of the lovely cases you sent me. sorry for being absent, i have been so busy. i am on holiday now and won't be going anywhere so i should have more time to keep in touch.