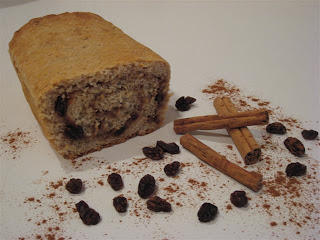 As he snacked on some dried fruit, Matheus asked if I could make some type of raisin bread for him. He really like raisins ans asks for it in all kids of muffins I make, his favorite being the banana bran ones.
Of course I could make a raisin bread, and there I go, the great mommy who loves to cook and bake in search of a raisin bread for my happy boy! And for this search I knew where I would easily find something that I would not only want to make but also to eat: my new Whole Grain Baking book by King Arthur.
And so, I found not a raisin bread per se, but one where the wrinkly dried fruits could be easily incorporated. And not that I want to brag about it, but my idea resulted in a very tasty bread!
I ended up making the Cinnamon Swirl Oatmeal Toasting Bread, which was actually a variation for another recipe called Honey-Oatmeal Sandwich Bread.
The variation with cinnamon turned up delicious, really good! The cinnamon-y swirl parts where divine, and the bread itself was so good that I am already planning on making it again, this time in its original form.
The bread came out really light in texture, not dense at all, which made me really happy, as I had read comments on this particular recipe about it being a little dense; but ours was perfect.
Another comment on this was that the bread was too sweet due to the honey in the dough, so in order to avoid that I used 2 tablespoons of brown sugar in place of the 1/4 cup of honey called for in the recipe, reducing the sugar and not letting the honey take over the desired cinnamon-raisin flavor. (The honey I have here is from my uncle's farm in Brazil, super natural and extremely good, whoever it is strong and do overpower other flavors, so this time I opted to left it out).
The recipe didn't call for it, but I sprinkled some raisins after spreading the cinnamon filling over the rolled out dough, since the initial intention was actually to make a raisin bread.
In the end, Matheus looooved the bread, proclaming it the best cinnamon raisin bread! He was not the only one who was found of the loaf and it ended up not lasting long, which again, makes me happy and allow myself to more adventures in bread baking in the very near future!
Here I post the recipe as I made, hope you all like and enjoy it too!
Ana

Place boiling water, oats, butter, salt and honey in a bowl, stir and let cool to lukewarm.
Mix remaining ingredients with oat mixture and knead (using hand, or machine) until you get a soft smooth dough. Place dough in a clean greased bowl, cover and let it double in size (about one hour).
Deflate dough, transfer it to a work surface and roll it into a 8x24-inch rectangle (I didn't even measure, just made a rectangle the size I thought would fit my loaf pan!!).
Combine in a small bowl the ingredients for the filling, except the raisins.
Spread the filling over the rolled dough, then sprinkle the raisins on top. Roll the dough and as you go gently tuck in the edges to seal the filling. Seal the seam, and smooth the dough into a 9-inch log. Place it in a greased 9x5-inch loaf pan.
Cover the pan lightly with plastic wrap and let the dough rise one more time, until the dough has risen about 1-inch over the rim of the loaf pan.
Bake the bread at 350F for about 50 minutes, until golden brown or a thermometer inserted in the center registers 190F. (I actually measured mine and it was right on, 190F!!!!).
Cool bread completely before slicing.

And here a picture of the finished loaf, before slicing. It looked nice, but I like the sliced one with the cinnamon swirls a whole lot better!! 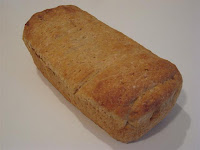 This bread sounds wonderful! I think I will try this one with the raisins...I think my husband would really like it!

What a beautiful and delicious bread, Ana!! Like your son, I love cinnamon and raisins, and I'm sure the oatmeal gives this bread a wonderful flavor... I was going to ask for a slice, but I guess you don't have leftovers, do you? ;o) XXOO

Ana, this is absolutely divine! I love cinnamon swirl bread and you've made it healthy! :)

ooo im gonna have to make this one again... maybe i screwed up somewhere making it a little denser? i dunno.. o yeah i made the sesame and sunflower loaf yesterday... really good, i reduced the amount of seeds tho cos i ran out but it was still very seedy, o and i increased the WW flour to 1 cup and the AP flour to 1 1/2 cups and added a tablespoon of dough enhancer. yeah realy good

Ana,
You're such a good mama. :)
The bread sounds delicious, and I love that it's got a swirl in the middle. It's just so pretty. Plus, the filling sounds good enough to eat all on its own.

So making your carob coconut cream tonight. I don't have chips, but I have carob powder. Can't wait. Thx for sharing the idea, and I know I'll love it if it's Matheus approved. :)