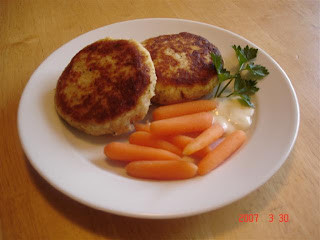 After a few days with some sort of stomach virus acompanied of lots of nausea and absolutely no desire to eat, I started to feel better and yesterday went to get some fish in order to make a yummy looking recipe from Fernanda's blog Chucrute com Salsicha. The recipe called for halibut, but unfortunately they did not have any fresh ones at the market and I ended up coming back home with a few tilapia fillets instead.
I did get some fish, but it sure was not the one I wanted, so I decided to make something else and save Fernanda's recipe to make with halibut as soon as I can get my hands on some fresh and good looking fillets. (After getting the fish it seemed I wasn't actually in the mood for it, has it happened to you before?)
Since fish is very perishable I needed to find some good recipe to make with my fillets before the went bad. So, I went for a search and easilly found a recipe that will most definitely be repeated at our house.
Matheus has been asking me to make crab cakes (he has never had it, and neither have I), so I decided to look for something similar in order to satisfy his cravings in some way, even though there were no signs of crab meat near my house.
I found a recipe for Fish Cakes and decided to make it for our dinner today. What a happy choice it was!
The recipe is super easy to make and the end result were very nice and fluffy cakes with a subtle fish taste and delicious creaminess from the potatoes used in the dough.
Matheus loved the cakes, as did the husband, yep, it was a success!
I did cook my tilapia fillets in order to make these, but I believe this is a wonderfull recipe to use when you have leftovers fish around. I can see this being made with most kinds of white fishes, and even with salmon - which would probably give these a nice pinkish hue.
I may even try making these using crab meat instead of the fish, as I was very fond of the potatoes and the texture it provided, plus it doesn't have any mayonaise in it, which I absolutely cannot stand.
All in all a great recipe, nice and simple with great flavor to boot!
We had ours with some steamed carrots and ranch dressing or as Matheus calls it: "dipping sauce", oh, and Matheus had the idea of having some ketchup with it too. I know it may sound odd, but it did tasted good! :o) (not really gourmet as some tartar sauce would be, but not bad either!)
I made half of the recipe and got 6 nice sized cakes; I used Tilapia and red skinned potatoes on mine (cooking both in salted water to impart more flavor - to the fish water I also added the juice of half lemon), everything else was done per the recipe. By the way, this great idea came from the wonderfull blog Simply Recipes. Thanks Elise for another delicious recipe!!
Enjoy!
Ana

Boil and mash the potatoes, set them aside.
Boil the fish until it flakes easkly. Drain and flake the fish with a fork.
Mix the flaked fish, the potatoes and the rest of the ingredients together well by hand. If the mixture is too crumbly, add another egg. If too sticky, add more bread crumbs.
Form the mixture into cakes and fry them on medium high heat in a skillet coated with oil.
Makes 12 fish cakes. Serves 4-6.

Ana, delicious looking. i am a very big fan of both fish and crab cakes. Every time I see tilapia I think of you as you seem to really like it. I have not tried it yet.Sorry to hear that you were not well. Great thing that you are better already.