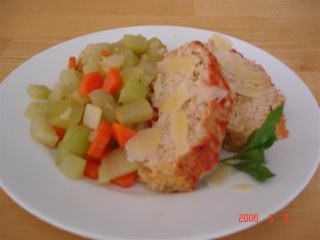 I have posted a recipe for meatloaf here before, but I tried a different recipe last week (which I saw on a new TV show) and it was so good that I had to come and post it here. I actually liked it so much more than the previous recipe, that this one is now declared my favorite.
Meatloaf is not a gourmet dish by any means, but I like the way it tastes and even more the ease of preparation, and home cooking is basically this: healthy food made with love, that taste good and is easy to prepare, right?!
There is no work involved in making meatloaf other than mixing and putting it into the oven, pretty easy but tastes so good! And is versatile too, as you can shape it in any form, bake it in individual portions (using muffin or mini loaf tins), and add anything you like to it from a variety of veggies to cheeses, some people even add whole cooked eggs inside them, making it look prettier when cut through.
I usually make mine plain, sometimes adding grated carrots or zucchini; they make it moister and taste it even better.
This recipe is no different from the others, however it produced a extremely moist loaf, and better than that, it was made entirely with ground turkey breast (which usually tend to be dry).
The different ingredient here is oatmeal, it really added to the moistness of the meatloaf, and believe me, you cannot taste it at all. The one thing I added extra to the recipe was a 1/4 cup of grated parmesan cheese, as I think it adds a lot of flavor to this type of dish.
This now became a favorite and will definitely be repeated many times here! Give it a try!
Ana

Preheat the oven to 350 degrees F.
In a small bowl, stir together the oats and milk. In a large bowl combine the turkey, oat mixture, onion, bell pepper, eggs, Worcestershire sauce, ketchup, grated cheese, salt and a few grinds of pepper. Mix just until well combined.
Transfer the mixture to a loaf pan. Pour the tomato sauce over the meatloaf and sprinkle with sliced onions (if desired). Bake for about 50 minutes or until an instant-read thermometer registers 160 degrees.F.
Remove from the oven and let rest for 10 to15 minutes before slicing.
(Recipe adapted from Healthy Apetite by Ellie Krieger)

I absolutely agree with you: good food is not necessarily gourmet food, but the one that uses the best and freshest ingredients available, with creativity and LOVE:)) Sure, gourmet food is good, but nothing speaks to my heart - and taste buddies - as well as cozy food:))

I am such a big fan of your other meat loaf recipe..are you sure this one is much better???? I know it sounds it..but the other one...yummy..

Brisa, bom te ver por aqui, adoro seus comentarios!
Karen, espero q tenha dado certo e q voces tenham gostado das receitas tanto quanto nos aqui!
Valentina... the other one is good, I loved that recipe, but this one was soooo moist, the flavors were different, but I like the texture on this one better. You know what, they are both favorites, and I will not stop making the previous recipe, that is for sure!
Akemi, eh chuchu com cenoura mesmo, bom, ne?!! Eu adoro chuchu!!