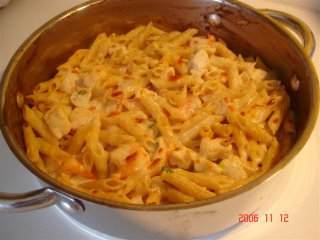 The recipe I am posting today is a very nice one, with restaurant flavors! Well, and it should be, because I got the recipe from our local newspaper, and it actually came from a local restaurant, which coming to think about it, it may even be a chain, it is called Biaggi’s.
We went to this restaurant twice already and, coincidentally, my husband had this very same dish. He liked it a lot and, fortunately enough, the recipe was featured in a section of the newspaper where people ask for recipe of dishes they have had at restaurant and eatery places around the town.
The husband was really happy to see the recipe; he even clipped it out and saved it for us to try on the weekend. So, under his commandment, I prepared it for our Sunday’s Pasta Lunch!
The original recipe actually called for ziti, but I used penne pasta, which was what I had on hand.
The dish is full of flavors, imparted mainly from the prosciutto that is initially sautéed and the white wine later added to the sauce. It is a rich and creamy, deliciously tasty sauce that I believe most people would enjoy!
I actually would have liked it more without the prosciutto in it, as it is not my favorite flavor, but the sauce would certainly suffer from the lack of it, as it does give some nice sort of “smoky” undertone to the whole dish.
I made half recipe and used half-half instead of the cream asked for in the recipe, just because that was what I had on hand. To be quite true, I don’t think the sauce was less good because of it… and it was probably a nice change for our hips!
The chicken and shrimp are very delicious together with the sauce. This is not your everyday pasta; it is more of a special dish, to be made on weekends and even when you might have company around, but certainly one that is worth trying at least once!
Hope you all enjoy too!
Ana

Note: I just want to say that I am sorry for the picture being presented inside the pan… I should actually have baked it in a casserole-type dish, but just for the sake of my “dishwasher husband”, I decided to bake it in the same pan I made it and save my loved one a few minutes in the sink.
And as it was done everyone was so eager to try the dish that I ended up not plating it nicely enough for a decent picture… Hope you still enjoy it as it was!

Penne Al Forno
(adapted from the News and Observer newspaper)

Preheat oven to 400 F. Grease a 9x13 inch baking dish.
Cook pasta according to package instructions, drain and reserve.
In a pan melt butter, add onions and prosciutto and sauté for about 5 minutes. Add garlic and chicken, sauté for 3 minutes. Add shrimp and continue to cook for 3 minutes more.
Add wine and cook until liquid is reduced by half, 3 minutes. Add cream and cook for 5 more minutes. Stir in the Parmesan and scallions, season with salt and pepper to taste. Stir in the cooked pasta and simmer for 3 minutes. Pour pasta into prepared dish, top with mozzarella and bake for about 15 to 20 minutes, until lightly browned. (I baked 10 minutes and them put it under the broiler for 2 more minutes to brown the top!)

Shrimp, prosciutto and chicken, quite a mix!

There's a recipe I've been willing to try from a Donna Hay's book, it's called baked carbonara - I liked the idea of baked pasta!

Ana, I love all the ingredients in this dish.It all sounds very grand. I will write it down and save it for a special ocasion.Thank you for sharing with us

Patricia, I hope you like it, my husband loved this dish. It is a nice combination of flavors!

Valentina, it is a great combo of flavors, and I would say it is really a great dish for an especial ocasion!